SuiteScripts allow developers and administrators to create flexible business logic within NetSuite such as business processes and new applications, all of which can be tailored to specific business needs. SuiteScripts are built on Javascript which enable full-featured application-level scripting capabilities throughout NetSuite. Let’s look at the different types of Suitescripts that are available for development and customization of NetSuite application:

2.Client Script Type: Client scripts, as the name suggests, are scripts that are executed on the client side. They can validate user-entered data, auto-populate fields or sublists at various form events. These scripts can be run on most standard NetSuite records, custom record types and custom NetSuite pages such as Suitelets. Client scripts execute in the user’s browser by predefined event triggers such as loading a form for editing, entering or changing a value in a field (before and after it is entered), selecting a line item on a sublist, adding a line item (before and after it is entered) and saving a form.

3.Map/Reduce Script Type: Map/reduce scripts provide a structured framework for processing large number of records or huge volume of data. These scripts can be scheduled for submission or submitted on an on-demand basis. Map/Reduce is best suited for situations where the data can be divided into small, independent parts and processed independently. Some of the key features of this script type are:

4. Mass Update Script Type: Mass update script is a server side script that allows users to programmatically perform custom updates to fields that are not available through general mass updates. Mass update scripts can run complex calculations, as defined in your script, across records. Mass update scripts are started on demand, and users cannot prioritize them or schedule them to run at specific times.

5. Portlet Script Type: Portlet scripts enable the users to create custom dashboard portlets. For example, users can use SuiteScript to create a portlet that is populated on-the-fly with company messages based on data within the system. The following portlet script types are supported:

6. RESTlet Script Type: RESTlets can be used to define custom RESTful integrations to NetSuite. A RESTlet is a SuiteScript that users can make available for other applications to call, either from an external application outside of NetSuite or from within NetSuite. When an application or another script calls a RESTlet, the RESTlet script executes and, in some cases, returns a value to the calling application. RESTlets can be useful when you want to bring data from another system into NetSuite, or if you want to extract data from NetSuite. RESTlets can also be used, in combination with other scripts, to customize the behavior of a page within NetSuite.

7. Scheduled Script Type: Scheduled scripts can be scheduled for submission or submitted on an on-demand basis. They are server-side scripts and users can deploy scheduled scripts that can be processed on a recurring basis if needed. This script type has extremely large governance limit compared to other script types and so, users can use them for bulk-processing or long-running background processes. The shortest time interval to run a scheduled script is every 15 min. In 2.0 there is no concept of yielding automatically for schedule scripts (this used to be the case in 1.0). Developer should take care of coding the logic to handle yield scenario so that the schedule script resumes its processing from where it stopped due to the huge volume of data or reaching governance limit.

8. Suitelet Script Type: Suitelets are extensions of the SuiteScript API that allow you to build custom NetSuite pages and backend logic. Suitelets are server-side scripts that operate in a request-response model, and are invoked by HTTP GET or POST requests to system generated URLs. They can be used to implement custom front and backends. Suitelets execute on the server.

9. User Event Script Type: User Event scripts are triggered when users work with records and data changes in NetSuite as they create, open, update, or save records. These scripts can also be used for doing additional processing before records are entered or for validating entries based on other data in the system. User event scripts can be used to perform various tasks such as Implement custom validation on records, enforce user-defined data integrity and business rules, perform user-defined permission checking and record restrictions etc. 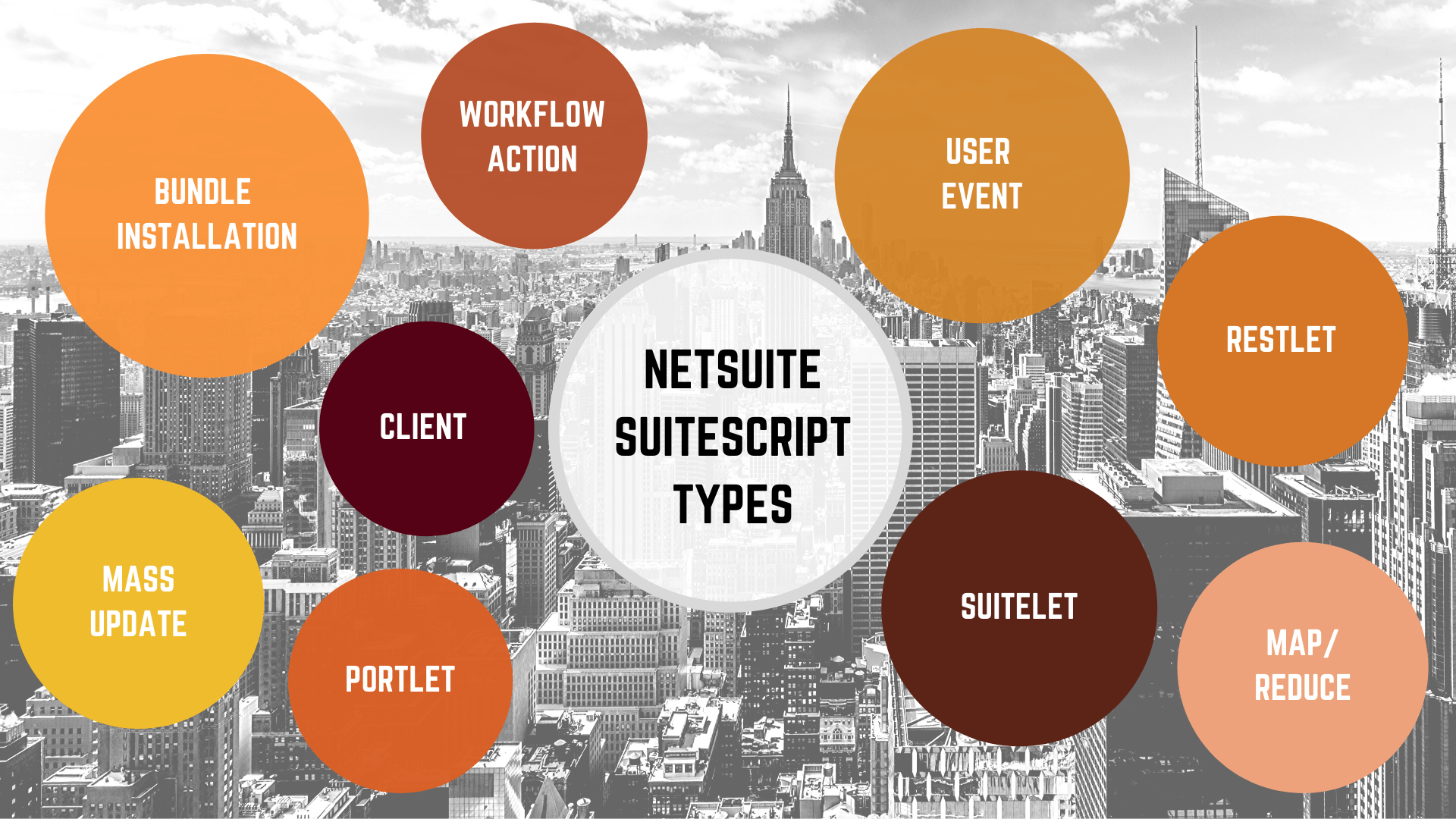 Tvarana’s team of over 70 Certified NetSuite Developers have the solution for your custom development needs. Contact us here.

Tvarana was founded in 2007, with a vision of providing NetSuite support to customers at an affordable price.

Over the years, we have evolved as a NetSuite SDN Partner, successfully completing over 500 projects involving customization, cloud integration and app development.

Our team specializes in offering cloud solutions to users of ERP and CRM platforms and has experience in technologies like NetSuite and Salesforce, and IPAAS solutions such as Dell Boomi, MuleSoft and Celigo.

We currently have a dedicated NetSuite team of over 90 members, and 8 apps listed on Suiteapp.com.